These are just some of the features of the Anniversary Update, the next major release of Windows 10. And as of today, an early version of the update is available to try for Windows Insiders. We’ve been running the new version for the past few hours. Here’s how to install it, and our early impressions.

Installing the new update is fairly straightforward. Go to Settings > Update & security > Windows Update > Advanced options. From here, scroll down to Get Insider Preview builds, and make sure you’re on the Fast option. Check for updates (you might have to wait an hour or so first), and you should be able to receive a new version of Windows: Preview Build 14316. Install the update, reboot and you’ll have access to all of the new features.

Bash on Ubuntu on Windows

If you’re a developer or just like Linux, then the first thing you’ll want to try is Bash. This is the shell, the console, from Ubuntu Linux, literally transplanted into Windows 10.

To install it, visit Settings > Update & security > For developers and ensure Developer mode is enabled. Next, type ‘Turn Windows features on or off’ into the search box in the Settings window, and pull up the result of the same name. Scroll down to find Windows Subsystem for Linux (Beta) and tick the box, then press OK. You’ll need to go through a fairly long installation process, including a restart or two. When this is complete, open up the command prompt and type bash. You’ll be asked to confirm the installation; do so and bash will be downloaded and installed. From here, you can run ‘Bash on Ubuntu on Windows’ through the start menu. 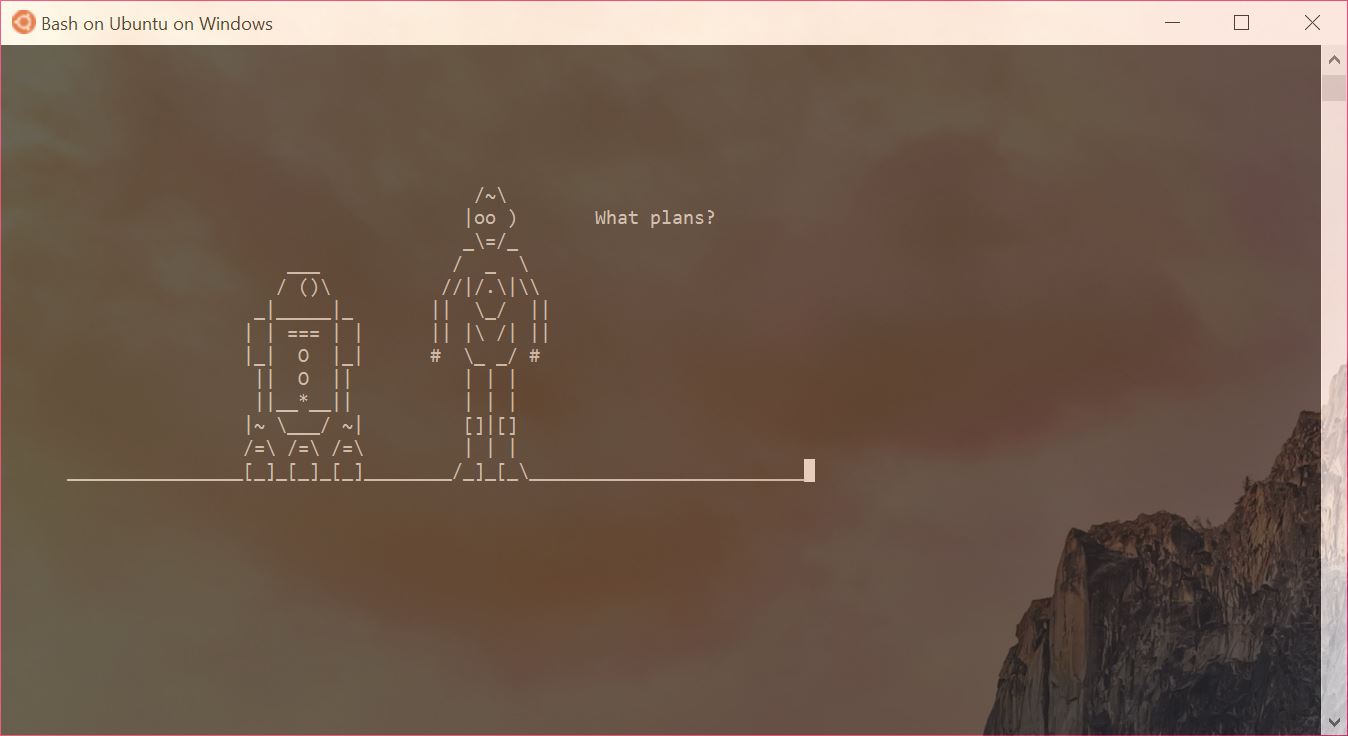 Not everything works, but it’s an exciting enough start. If you can’t access apt-get, then you may need to edit a file (nano /etc/resolv.conf) and add in the IP address of your router (nameserver 192.168.0.1), save the file and try again. Remember to fill in your own router’s IP address; the above is just an example. You could also try Google’s DNS servers (8.8.8.8 and 8.8.4.4) instead.

Cortana has been upgraded with some new tricks for connecting to Windows and Android phones that are running the Cortana app. She can alert you when your phone’s battery is low, can find your phone when asked, and can also display directions to a place on both your PC and phone simultaneously. There are some reports of build 14295 of the Cortana mobile app not working correctly, but this should be fixed by a future update.

Microsoft are also continually improving their Edge browser. The new Windows 10 build includes better versions of the Reddit Enhancement Suite, OneNote Clipper and Pin It Button extensions; the long-awaited AdBlock is sadly not included but should arrive soon(ish).

Run Skype UWP Preview from the Start Menu, and you’ll gain access to the new universal windows platform version of Skype. This build has limited functionality compared to the full desktop version, which remains accessible. The interface is cleaner than earlier versions, with a simpler settings area via a Gear icon on the lower left side of the window. There’s more on Skype UWP at the Skype blog here. For now, this isn’t worth running for anything more than curiosity.

There are a bucket-load of new Emoji included in the update. These have been made bigger than most other emoji, so they look better on high-DPI displays, and their two pixel outline ensures that they are visible on light and dark backgrounds. You’ll also notice that people-based emojis are available in a nice range of skin tones.

Dark mode is finally unlocked in Windows 10! Visit Settings > Personalisation > Colours, then scroll all the way down and select Dark under Choose your mode. The Settings menu and many UWP apps will use a dark background instead of a light one, which looks cool and is a little easier on the eyes at night.

You can also choose where your selected colour appears, with individual choices for Start / taskbar / action centre and the title bar. Here’s how it all looks together:

Pretty sweet, right? It’s one of my favourite features of the Anniversary Update thus far.

Sadly, I don’t have a Windows Phone hand to test this, but Continuum should now be possible without using a Continuum dock as long as your phone supports the standard. Open the Connect app, and you should be able to connect to your Windows Phone as long as it’s on the same network. The same app should also allow you to cast your PC’s screen to other nearby PCs.

There are many more additions to Windows 10 in the Anniversary Update that we don’t have time to cover here. Check out the Windows 10 blog for the full list, and let us know if you find any good ones in the comments below!

Overall, I’m pretty impressed with the release. Pretty much everything works, and there are some solid additions here, particularly for developers and Windows / Android phone users.