Here at Mobile Fun we support thousands of handsets with tens of thousands of accessories, but sometimes there just isn’t the accessory that you’re looking for. While you’re encouraged to get in touch if you’d like us to stock something in particular, you soon may have another option: designing and printing an accessory to fit your needs!

That’s what RogueMat at WPCentral has done. Disappointed with the range of Windows Phone accessories in his local official Nokia store in South Africa, he decided to build a stand that would fit his Nokia Lumia 900. Armed with a MakerBot Thing-O-Matic 3D printer and some ABS plastic, he set to work. He started by designing the stand he wanted in Google Sketchup, a free Computer Aided Drafting (CAD) program. He created a two piece design that included the Batman logo, seeing as how Nokia released a Batman-themed Lumia 900. Once he had completed the design, Mat printed out the stand and clipped it together.

The whole process took a few hours and cost just under $1 to print. Mat also uploaded the schematic he used to thingiverse, an online repository of 3D printer designs.

While 3D printers remain fairly expensive at around $2000, prices are coming down fast and soon it may be possible to print out your own accessories cheaply. It’s definitely an interesting look at the future! 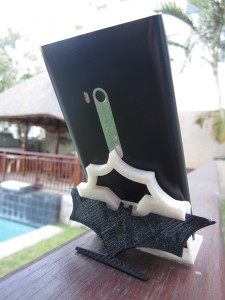 The stand in use after being painted

If you haven’t got access to a 3D printer (check your local university!) then you might want to have a look at our Nokia Lumia 900 or Nokia Lumia 920 accessories.

What do you think about 3D printing – how cheap would they have to become in order to be worth the investment? $1000? $500? $100? Let me know in the comments below or on Twitter @mobilefun!