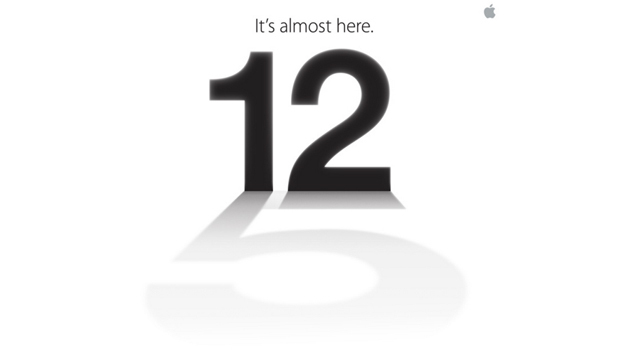 It’s finally happened: Apple have released press invitations to an event being held on September 12. They’re widely expected to announce a new iPhone, the iPhone 5, so we thought we’d go through the rumours swirling around and say whether we reckon they’ll hold up or not.

1. The iPhone 5 will actually be called the iPhone 5.

It seems almost certain that this phone will be called the iPhone 5. The clue’s in the press invitation Apple sent out, which clearly shows a 5 in the shadow of the 12 representing the date of the announcement. While an image has appeared that seems to show references to the new iPhone, I think that Apple will have reconsidered their position since they announced the iPad 3 as “the new iPad”, since everyone just called it the iPad 3 anyway.

2. The iPhone 5 will include re-designed earphones in the box.

While images of new Apple style in-ear headphones were released last month and had branding that indicated they were created by Apple, I don’t believe they’re the real deal. The most unusual feature is a grille that ports directly into the ear canal, allowing for much more efficiency and higher perceived volumes overall. While the headphones may be an upgrade, Apple are unlikely to want to change their iconic design. The new models lose a lot of the elegance of the originals and look much more like many other after-market iPhone headphones.

3. The iPhone 5 will have a taller 4″ screen and higher resolution.

We’ve heard through iOS 6 beta code and numerous prototypes floating around that the iPhone 5 will come with a much larger screen than the old iPhone – a full 4″. That’s room for another row of icons and a resolution of 640 x 1136. As well as giving you more space on screen, the new resolution is quite close to 16:9, meaning it’ll be much easier to watch films and other HD content on your iPhone. Finally, it also looks like the new phone’s screen will be quite a bit thinner, allowing Apple to shave off even more millimetres.

4. The iPhone 5 will include ‘snake mode’, which will turn the display black and white and launch a Nokia 3310 era Snake app.

We’ve heard that the next iPhone may include a Snake mode that hearkens back to the early days of mobile gaming, with a full-size Snake game faithfully emulated from the original. The screen also turns black and white in this mode, and the standard ringtones are replaced by retro alternatives.

5. The iPhone 5 will launch with LTE.

High speed data networks, known as 4G LTE, are getting more and more common. The vast majority of Android phones released in the WS come with LTE as standard now. It’s also getting to be that way in Germany as well. With the recent iPad 3 coming out with an LTE connection, it seems a no-brainer that Apple will launch their latest iPhone with LTE – and no doubt a bigger battery to compensate.

6. The iPhone 5 will launch with LTE in the UK.

While it looked like the UK wasn’t going to be getting LTE service until next year, Ofcom unexpectedly awarded Everything Everywhere (combined T-Mobile and Orange) an exclusive license to offer LTE from September 11th. A day later, the iPhone 5 launches. Does that mean we’ll be getting an LTE iPhone in the UK? It would be a tremendous coup for Everything Everywhere and Apple if we did, but I just don’t see this happening. Chalk this one up to a coincidence – but hold out hope!

We know that the next iPhone will indeed come with a nano SIM card, after seeing pictures of nano SIM cards being sent to T-Mobile in Germany. The new, smaller SIM card will allow the phone to be even more space efficient, and will no doubt see a brisk trade in SIM cutter tools too.

8. The iPhone 5 will use a smaller 9 pin dock connector and a relocated headphone jack.

We were actually among the first to leak this story, and it has been borne out by more recent evidence. It looks like we’ll see a 9 pin dock connector that’s physically much smaller, and the extra space will be used to move the headphone jack to the bottom of the phone. There’ll also be noticeably larger speaker grilles, which should produce much clearer and louder sound.

According to reports, Apple have chosen Android 4.1 Jelly Bean as the operating system for the iPhone. New features are expected to include deeper sharing integration, NFC support and dynamic widgets. Apple CEO Tim Cook stated “iOS was holding us back… [We] decided to reskin Android with brushed aluminium and call it a day.” Speaking to journalists later, he remarked “No one will notice anyway.”

10. The iPhone 5 will be fully accessorised by Mobile Fun.

Confirmed! No matter what size or shape the iPhone 5 is, we’ll have all of the best accessories available, from the coolest iPhone 5 cases to the most affordable Ultimate Pack. Be sure to stay tuned to Mobile Fun for all the latest news and accessories for the iPhone 5!

So those are our predictions – what are yours? Let us know on Twitter @mobilefun or leave a comment below!