Four titans of the smartphone world have been plunged into conflict this week, as American warranty firm Square Trade released a video showing the Galaxy S7 and S7 Edge going up against Apple’s latest in four durability challenges. It’s an entertaining video, so check it out above or see the results below!

The first challenge was waterproofing, courtesy of the company’s ‘Deep Water Dunkbot’. The ‘bot immerses the phones under water for half an hour at a depth of 1.5 metres. Of course, the iPhone 6S and 6S Plus are not officially water resistant, although some interior cladding makes them more water resistant than many other unrated phones on the market; meanwhile the Galaxy S7 and S7 Edge have an official IP68 rating which should allow them to withstand the immersion test.

True to their rating, both Galaxy phones survived, although they suffered ‘permanently muffled and distorted’ audio from then on. Apple’s phones did understandably worse, with the iPhone 6S losing all audio and the screen showing signs of damage. The iPhone 6S Plus didn’t even survive the test, showing signs of damage after 10 minutes and dying completely after 24 minutes. 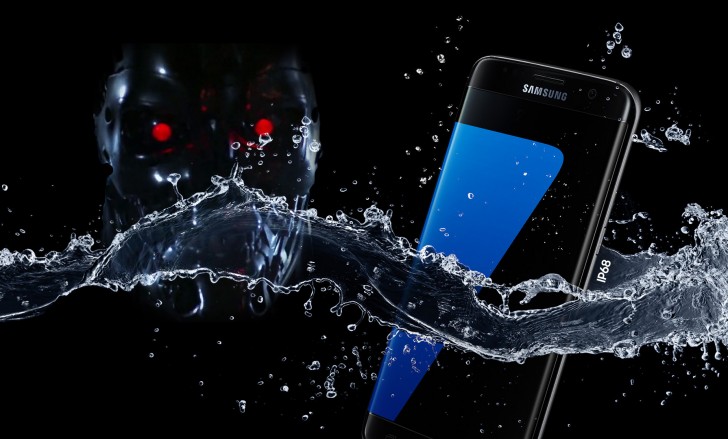 Next up was a test of drop and knock resistance, with the ‘TumbleBot’ taking the phones on a wild ride. The phones were tumbled continuously for 30 seconds at 50 RPM, offering a substantial challenge to each handset’s glass and metal designs. The iPhone 6S was the winner of this test, showing no signs of damage, while the iPhone 6S Plus suffered a shattered screen. The Galaxy S7 and S7 Edge avoided significant screen damage, but the back panels were pretty destroyed.

The third test was a classic: the drop test. The phones were dropped onto concrete from a height of 1.8 metres, with each phone dropped until broken both face-first and onto the corner. The S7 Edge survived one face-first hits and broke on the second, while the S7 broke immediately on the face-first test. The S7 Edge did better on the corner drop as well, lasting seven drops while the vanilla S7 expired after four.

Last up was the bend test. The Galaxy S7 Edge’s larger dimensions worked against it here, bending at 110 pounds of pressure. The Galaxy S7 lasted until 170 pounds of force was applied, matching the score of the iPhone 6S. We all remember the halcyon days of iPhone hate and #bendgate, but it seems that there’s not much difference when it comes to thin, metal unibody smartphones.

Overall, the S7 and S7 Edge phones received ‘breakability’ scores of 5 and 6, respectively, while Apple’s iPhone 6S and 6S Plus received scores of 4.5 and 6.5. That puts the two companies equal on total points, with the Galaxy phones winning out on water resistance, and the iPhones narrowly elsewhere.

If you’re picking up a Galaxy S7 or S7 Edge and want to prevent damage — whether from water, screen shattering or body bending — check out our line of cases and accessories via the links below. Thanks for checking out the article and let us know what you think in the comments below!