While the software keyboard on the Nexus 7 is okay, I wouldn’t want to use it to write anything longer than a tweet or a Skype message – too much of the 7″ screen is taken up by the hardware keyboard, particularly in landscape mode.

There are alternatives that can help – Bluetooth keyboards can provide a much more comfortable and rapid typing experience that’s essential for emails, articles or internet forum comments.

The first keyboard I tested was the ZAGGkeys SOLO. Aside from the annoying capitalisation, the Solo is one of the most stylish Android keyboards I’ve seen.

The keys themselves are fairly good – a bit small, perhaps, but with enough travel and an attractive chiclet design. One excellent feature of the Solo Keys is that the keyboard includes a row of Android shortcuts across the top of the chassis, allowing you to easily perform actions like returning to the home screen, locking the screen, searching, cutting and pasting (although the standard key combinations also work) and controlling media (although oddly mute doesn’t work). Of all the keyboards tested, this had the most working Android-specific keys. 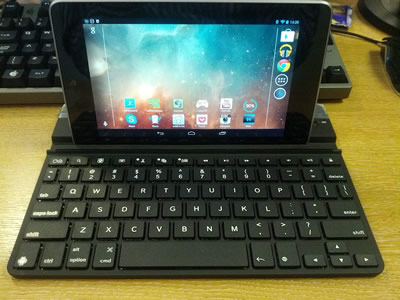 The keyboard includes a stand that will fit up to a 10″ Android tablet, but the 7″ Nexus 7 fits nicely too. The screen angle isn’t the best, with the tablet sitting almost perpendicular to the keyboard itself, but it’s definitely workable if you can lean back – this might not be ideal if you’re stuck in a non-reclining train seat.

The keyboard is easy to set up for first time use, with a very obvious connection button that works quickly and easily. The keyboard comes with a partially charged rechargeable battery, which should last for some time and can be charged quickly using micro USB.

To test the keyboard’s performance, I did a one minute typing test on 10fastfingers.com. For the ZAGGkeys SOLO, I got a score of 96 words per minute – about ten words per minute below my normal score on a good desktop keyboard, so not bad at all.

This Motorola wireless keyboard is marked for the Motorola Xoom and/or Atrix, but it works quite well with the Google Nexus 7.

The keyboard has an incredibly attractive look, with flat and square full size chiclet keys. The key travel is a bit shallow in my opinion, but the typing action is still pretty good. The layout closely mirrors that of a standard keyboard, albeit with no insert/delete cluster or numberpad.

The keyboard includes shortcut keys as well – there are media controls on the left hand side (again, mute doesn’t work) and app shortcuts on the right hand side (which almost all work). There are also back, home, search and menu keys, although none for multitasking. Some of the key placements are odd – back is the upper left, home is the upper right, the single quote key is above tab and the colon is below backspace. Aside from the quotation mark issue, these are easy to get used to.

The keyboard uses AA batteries, which will no doubt power the keyboard for some time but will have to be replaced, instead of being recharged like the Zagg Solo.

I scored 97 words per minute on this keyboard, although I did have quite a few more errors thanks to the misplaced single quote key. The keyboard overall feels a lot more solid and substantial than the Zagg keys, which felt a little flimsy in comparison. The keycaps are much more slick on this keyboard, which isn’t an advantage or disadvantage, but rather just something to note.

The Apple Wireless Keyboard is one that I’ve been using for a while, and I’ve got to say it’s one my favourite Bluetooth keyboards to date. The chassis is silver and the keys white, making this a unique choice amongst Bluetooth keyboards, but it may not mesh well with the (so far) black only Nexus 7 if you’re fussy about coordination.

The chiclet keys are a thinner version of the keyboard you’ll find on a Macbook Pro, and are pretty much full size. The key arrangement includes some Mac weirdness (e.g. @ is on 2 instead of on single quote like proper UK keyboards), but overall is very close to a standard laptop keyboard.

The top row includes function keys which are a bit hit-and-miss on Android – the first six keys do nothing, but the media keys do function as intended (with the exception, once again, of mute). Escape works as a back key, but other functions like search and home screen are noticeably absent. Cut, copy and paste all work as you’d expect using Ctrl + X etc.

The keyboard uses AA batteries slotted into the stand, as was the case with the Motorola keyboard. Of course, there’s no stand included for the tablet itself.

I got 95 words per minute with this keyboard, which surprised me as I have the most experience with it. If I had to guess, I’d say the key travel is a little too shallow for me. Still, this is a good choice particularly if you’re used to the Mac keyboard layout.

Of course, it’s not just Bluetooth keyboards that work well with the Nexus 7. Most wired USB keyboards can also be attached via a USB OTG adapter. In this case, I’m using a Cooler Master Quick Fire Rapid keyboard. The keyboard uses Cherry MX Black mechanical switches – not the best choice for typing (Blues or Browns would be ideal) – but certainly workable.

In terms of additional key support, the Escape key works to go back and cut, copy and paste work in the normal desktop way. The Cooler Master keyboard also include media keys, accessible via Fn, which work fine (with the exception, as with all other keyboards I’ve tested), of mute.

Of course, a standard desktop keyboard is a lot thicker and more weighty than a typical Bluetooth keyboard, meaning it’s much less suited for travelling with (and particularly a hefty mechanical like the Quick Fire Rapid). However, you do get a full sized layout, with the option for a number pad and insert/delete cluster which all work as you’d expect, making it a good choice if you just want to type on your tablet in a fixed location like your desk at work.

Here I got 96 words per minute, so comparable with the Bluetooth keyboards. I reckon I could stretch out an extra 10 words per minute with Blue or Brown switches, but it’s definitely quite close to the Bluetooth keyboards. However the big difference in typing ease between full size and travel keyboards is unlikely to be in just plain text – it’s formatting and functions that are much harder to perform on smaller keyboards with irregular key spacing, which is something to keep in mind.

So there we have it – four keyboards that’ll work quite happily with the Google Nexus 7. I think two points really stood out to me after the testing:

Firstly, typing with a physical keyboard is so much more convenient than writing using the software keyboard – you get much more screen space and you can type faster and more accurately.

Secondly, the differences between keyboards are subtle – at least for the ones I tested, each performed fairly similarly in terms of speed, but really differentiated each other in their additional keys, layout and style.

If you’re looking for a recommendation on which keyboard to get, at the moment I’d suggest the Motorola Bluetooth Keyboard – it combines Android-specific keys with a durable chassis and a good typing experience.

I hope this article proved helpful. Be sure to write in with your own experiences with Bluetooth keyboards with the Nexus 7 or other Android tablets, and if you have any questions feel free to ask them. Thanks for reading and have a good one!