We’re now just one day away from the announcement of the next Samsung Galaxy smartphone at a Samsung Unpacked event in London. The previous incarnation, the Samsung Galaxy S II, was the best selling Android phone last year so expectations are high.

This year, things may not be so easy. Samsung’s main rivals, HTC, have struck harder and faster than they did last year, releasing the HTC One X before the next Galaxy has even been announced. That flagship phone has been incredibly well reviewed for its strong specifications and innovative design, putting even more pressure on Samsung to perform.

Samsung, for their part, have continued to hype the event, refusing to show of the next Galaxy at CES or MWC like many of their peers did with their flagship phones, and releasing a short trailer promising nothing short of magnificence but showing off nothing. The security around the launch has been higher than any other Android handset, with testing units shipping in Galaxy S III cases designed to obfuscate the final design.

Despite this, through the myriad of leaks and official releases we do know a lot about what the next Galaxy is likely to look like, what specifications it’ll have and what special features will set it apart from the crowd. Let’s have a look at what we know so far, and what we expect will be announced at that press conference at 7 PM tomorrow.

Samsung have (almost) stuck to calling the upcoming handset “the next Galaxy”, in much the same way that Apple has called their latest tablet “the new iPad.” However, I don’t think we’ll see that as the final name of the device, as two critical sources have indicated the name will be the Samsung Galaxy S III.

The first is Robert Yi, a senior Vice President at Samsung. Speaking during their recent Q1 earnings call, Yi said “We are anticipating very strong demand of Galaxy S III.” The second is the official Samsung Unpacked 2012 app, which included in its tags “Samsung Galaxy S3”.

While these could have been mistakes by the individuals responsible, it does seem likely that we’ll see a return to the naming conventions established by the first two Galaxy S phones. 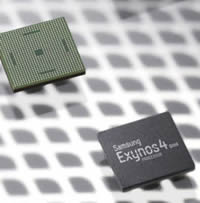 This is one area where Samsung have spoken publicly about the new handset, telling us that the phone will run a Samsung-made Exynos Quad chipset. The chipset is said to include four processor cores running at 1.4 GHz and an upgraded Mali graphics core. The new chipset apparently performs roughly twice as well as its predecessor but uses 20% less power – not a bad result.

As well as the official Samsung release, we’ve also seen the S III pop up in a few benchmarks. One of these in AnTuTu, where the Galaxy S III received a score higher than any other device – including the Tegra 3 powered Asus Transformer Prime and HTC One X.

While in Europe we’ll see this quad-core Galaxy S III, in the US things will be a little different. It looks like the quad-core chipset used won’t be compatible with LTE networks so the Snapdragon S4 will be used instead. This is only a dual-core chipset, but it’s about as powerful as the Tegra 3 and consumes much less power.

I’d expect to see 1 GB of RAM in the Galaxy S III. Some publications have floated the idea of 2 GB, but I don’t think that the additional performance will be worth the much higher cost to Samsung – and in turn to consumers. To my knowledge, no ARM-based tablet or smartphone has launched with more than 1 GB of RAM. 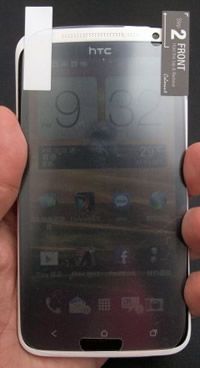 I’d be really surprised to see anything smaller than the Galaxy Nexus, which had a 4.65″ screen. The expected resolution is 1280 x 720, which at 4.8″ would result in a pixel density above 300 – what Apple classes as a Retina display. Any higher than 5.0″ will be getting into Galaxy Note territory, so I’d definitely go for that 4.7″ to 4.8″ measurement.

One thing that points towards a 4.8″ measurement is this supposed Galaxy S III screen protector, which is too big for the 4.7″ HTC One X.

We’re expecting the Galaxy S III to be a strong photographic camera, coming with at least the 8 megapixel sensor found on the S II or even a 12 megapixel sensor. The 12 megapixel count seems more likely, as the Sony Xperia S launched with this spec much earlier this year. The front-facing camera is expected to be 2 megapixel.

In terms of video capture, we’ll likely see the same specification as the S II: 1080p capture at 30 FPS, although if Samsung includes a dedicated image sensor like HTC have then that 1080p 60 FPS measurement might be within reach.

The Samsung Galaxy S III is unlikely to launch with anything particularly disruptive in this area – I’d expect the usual options, namely USB 2.0 with MHL (for simultaneous charging and HDMI out), wireless a/b/g/n, Bluetooth 4.0 and assisted GPS. In terms of cellular connections, we’ll likely see LTE in the US and HSPA+ here in the UK. In terms of the SIM card used, a micro SIM does seem most probably in the interests of saving space.

Again, this is somewhere where I can’t see the Galaxy S III diverging from standards of the day. I’d expect a 16 GB and 32 GB version of the phone, to equal the HTC One X and other recent flagships. There might be a small possibility of a 64 GB version. I doubt we’ll see any micro SD storage, although it remains an outside possibility.

From the images that have leaked thus far, we’re looking at a handset that looks very close to the Samsung Galaxy Nexus. That includes a slightly curved screen, a thin chassis and minimal bezel. We may see a different material used in its construction – perhaps a unibody polymer similar to the Lumia 800 – or Samsung may play it safe with their normal range of plastics as seen on the S II and Galaxy Nexus.

According to an anonymous source at Carphone Warehouse, the Galaxy S III will be available in two colours – white and blue. Those are the two colours that featured prominently in the invite (as seen in the header above), so it would make sense. This’d be the first time in a long time that a black version of a flagship phone wouldn’t be available on launch.

One thing we’re not likely to see on the Galaxy S III is a removable battery. Like the HTC One X and iPhone 4S, it’s almost certain that this will be sacrificed in order to ensure a thinner handset. Still, with the power gains provided by the new chipset, we should still see good battery life if the battery size is around 1800 mAh.

We’re also likely to see new and updated TouchWiz apps. One of these is likely to be an app similar to Dropbox that connects to Samsung’s S Cloud service. Like Dropbox, the S Cloud will probably include the normal mixture of cloud storage space, media streaming and potentially phone backups as well. The services thunder has mostly been stolen by LG who announced their LG cloud earlier this week, but it’ll still be a strong new feature.

We’ve also heard that the Galaxy S III will later be released as a Windows Phone, as Microsoft relax their hardware requirements for Windows Phone 8.

These are the sort of things that don’t turn up in benchmarks and images, so they’re much harder to confirm. Various rumours have been floating about – wireless charging at the range of several meters and waterproofing have been two of the more likely ones. Either would be a big differentiator for Samsung, and could be part of the reason why the Galaxy S III wasn’t revealed before now.

So that’s it folks – everything there is to know about the Samsung Galaxy S III. Be sure to tune into the Samsung Unpacked event on tomorrow at 7 PM, which will undoubtedly be covered here on the Mobile Fun blog. All of the major publications will likely have a live blog the event as well. Finally, you can watch live via the Samsung Unpacked app, which is available for free in the Google Play marketplace.

If you have any questions or comments, feel free to leave them below or direct them at our social presences on Facebook, Twitter or Google+. Of course, we’ll be presenting our Samsung Galaxy S III accessories as soon as the phone is officially announced.