You might think that this is an odd subject for a post because using a stylus on a touch screen phone is nothing new or exciting, but it’s not actually as simple as you might expect.

Over the last few years, the technology in touch screens has changed quite a lot, but as it’s not something that’s talked about you may not know about the differences between them.

One of the most important specifications of a touch screen phone is the screen type – Resistive or Capacitive. Until the launch of the iPhone back in 2007, the majority of touch screen phones featured a resistive display that often needed a stylus to navigate the menu system. Since then, more and more phones have been released with capacitive screens that rely on you using your finger to move around the menu system, but what’s the difference?

Some of the latest handsets to feature resistive touch screens

Resistive touchscreens are composed of several layers of plastic, and input is registered when two of these layers make contact with each other when pressed by a finger or stylus, creating an electrical connection. Generally speaking Resistive screens can’t track multiple inputs on a single display and often need a firm press in order for it to register.

Some of the latest handsets to feature resistive touch screens are the LG Pop, Nokia 5800, Sony Ericsson Satio, Nokia N97 Mini and the Samsung Tocco Lite.

Some of the latest handsets to feature capacitive touch screens

Capacitive touchscreens are traditionally a glass panel coated with a transparent conductive material. As the human body conducts electricity, any touch on the surface of the screen triggers the electric field and registers the location of the input. Capacitive touchscreens can more readily accept continuous input across the surface, and also track multiple fingers on a single display (multi touch).

Some of the latest handsets to feature capacitive touch screens are the HTC HD2, LG BL40, Nokia X6, Google Nexus One and the iPhone 3GS.

Resistive screens can be controlled with anything, your finger, a pen – anything that can press down on the screen. Capacitive ones can’t – they won’t work with a standard stylus and you won’t be able to use them if you’re wearing gloves. Capacitive screens only need a gentle touch, where as resistive may need a firm press in order for it to register. Capacitive screens tend to respond faster and are a little more accurate too.

Because of how the screens detect being touched, it’s not possible to use a standard stylus with a capacitive touch screen as they don’t conduct electricity. Each type of screen has it’s good and bad points, and if you want to know more about how they perform AllAboutSymbian have put together a great guide that runs through the performance differences between them. 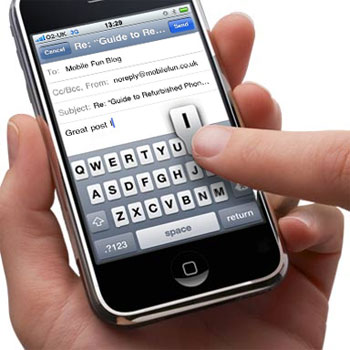 Personally, I’ve never got on with using a stylus with my phone, but anyone who’s used to using one will no doubt miss it when they make the switch to capacitive – an inevitable change as all manufacturers move to more advanced operating systems that require support for mutlitouch.

As always though, technology moves on and there are now a number of styluses available that will work with capacitive screens.  There are 3 Dagi Capacitive Styluses to choose from as well as a HTC branded one for the HTC HD2. What makes these different to a regular stylus is that instead of having a point to press your screen, they have a flat circular disc at the end that works in a similar way to your finger would. 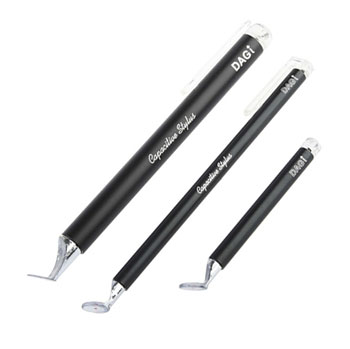 Each stylus does the same thing, they’re just different sizes:

If you decide to get a stylus for your capacitive touch screen phone, remember that that phone is designed to be used with your finger, so although the stylus will work, you may not find it as responsive as a traditional stylus is on a resistive touch screen device.

If you’re not sure what type of screen your phone has, take a look at GSMArena.com. They list the full specifications for every handset on the market and in most cases will tell you what screen type the phone has.