Not sure what to get? Check out our Top 10 HTC Hero Accessories

Following on from my post on the Top 10 HTC Hero Accessories and Top 10 HTC Hero Cases, I thought I’d take a look at some of the other ‘must have’ items for the HTC Hero – the Apps.

Since Apple launched the App store for the iPhone, the way that we use our phones has changed. Almost all touchscreen smartphones now have a version of the App store, where you can download free and paid for applications to your phone to increase it’s functionality.

I’ve been playing with the HTC Hero & Android Marketplace for a few days now and have been trying out some of their most popular apps. As my phone is an iPhone, there are a few comparisons to the iPhone in here but these are my favourites Android Apps so far.

ShopSavvy was featured heavily in T-Mobile’s first TV ad (the one where they all start dancing in the train station). It allows you to scan in the barcode of a product using your phone’s camera and it will then compare prices locally and online so that you can check to make sure you’re getting the best deal.

You can also see reviews of the product and set the app to alert you when the price of the item falls below a set limit. This is a great app that is currently only available on Android. 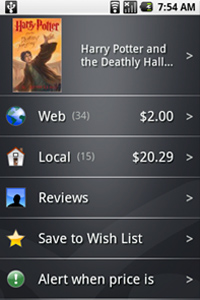 I’ve been using Movies on my iPhone for about a year now and it’s definitely one of the best movie apps available, so when I saw it available for Android it’s gone straight into my top ten. Movies allows you to search for nearby cinemas using your GPS location, search by film, see upcoming films & trailers and share ratings with your friends on Facebook.  It provides contact details for all cinemas, but lacks the ability to book your tickets through the app – hopefully this is on it’s way. 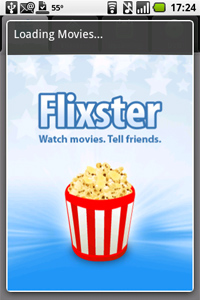 Movies by Flixster on Android

iPlayer is the most popular on-demand video player in the UK and if you really can’t wait until you get home to catch up on Eastenders you can now get the iPlayer on your Android phone. The BBC website doesn’t provide native support like it does for iPhone so you’ll need to use a third party app and beebplayer is one of the best out there.

Beebplayer provides support for two stream qualities – one for Wi-Fi and one for 3G. It can, in theory, play live streams of both TV and radio, as well as the catch-up programmes iPlayer is famous for. It can be a little temperamental and buggy, but this will only improve over time.

Beebplayer is only available to download through Android Market on your device, and offically only supported on Vodafone & 3. Other networks should work, but you could experience some problems. 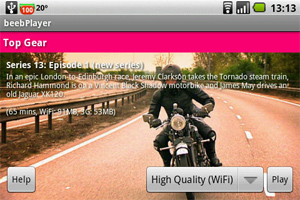 Augmented Reality is the supposed to be the next big thing to hit Smartphones although I think we’re some time away from it being life changing, having said that Layar really takes a step in the right direction. If you’ve not come across augmented reality before it’s where the ‘real world’ and internet based information services come together.

Your Hero uses its GPS and compass to determine where you are and which way you’re facing and then uses the camera to show your surroundings on screen. Augmented reality applications such as Layar then display information on top of what you’re look at – hence the name. These ‘layers’ of information can be turned on or off and there are layers available to show you information such as nearest cashpoints, train stations hotels – even which of your friends are nearby.

As you move the camera around this information updates in real time, with Icons on screen indicating where things are. To find out more information about a hotel for example, just press it’s icon and you’ll be presented with information such as address, phone number, website, reviews etc.  It’s still in its early stages and coverage is a little limited, but over the next 12 months Augmented reality is set to really take off. 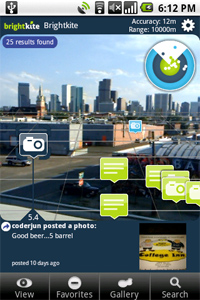 Personally, I’m not a huge Twitter fan, but this app comes highly rated by colleagues here at Mobile Fun. The Android Market has more Twitter apps than you can shake a stick at, but Twidroid stood out as one of the best – especially as it’s a free App.

As with most Twitter clients you can easily @reply to people and send direct messages. A full set of options is available if you press and hold on a specific message. You can also easily send links from the feed to the phone’s browser, and the software has no trouble dealing with more than one link at a time. If you are a twitter fan you may find that you get addicted to this app. 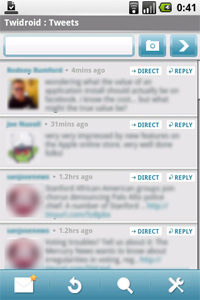 Meebo is an Instant messaging application that allows you to communicate with your friends regardless of the messaging program that they’re using. Meebo can connect to AIM, Yahoo Messenger, Google Talk/Jabber, MSN, ICQ, Facebook Chat & MySpace IM using just one log in. 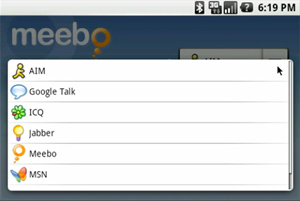 This is the clever kind of app that I love. It uses your location to adjust settings on your phone. It might seem a little confusing at first, but you can program your phone to perform certain functions when you get to predefined locations. For example – You can set the phone to remind you to charge your battery when you walk through your front door or you can set it to switch to silent mode as soon as you arrive at the cinema.

Recent updates to the app allow it to post messages to twitter when you get to work or sms relatives when you’ve arrived home. The list is endless and you can configure it to do exactly what you want. 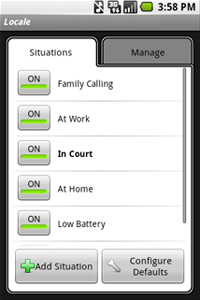 This is one of those apps that really makes you wonder how they do it. Shazam has been around for a few years now, but instead of paying premium rates for dialling 2580 on your mobile, you now have a free of charge app that can tag songs for you.

If you’ve not come across Shazam before, it’s a music tagging system. If you hear a song that you like but don’t know what it is, launch the app, press ‘tag now’ and hold the phone towards the speaker. Within seconds you’ll get information on the song, including Name, Artist, Album, Year of release, Amazon MP3 Store link, Artist MySpace Page and YouTube Video Links. It’s amazingly fast and surprisingly accurate. 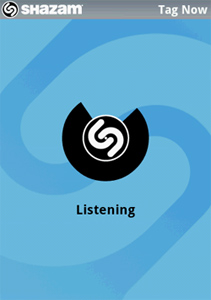 One of the biggest criticisms of the iPhone is the inability to set one of your MP3 files as your ringtone. While there are ways around this (see my post on free ringtones using iTunes) it’s a basic feature that is available on almost every other phone.

Android users can set MP3’s as ringtones easily enough, but what if you don’t want the first 30 seconds of a phone? That’s where ringdroid comes in – it allows you to select an MP3 from your phone or memory card and edit it so that your ringtones starts and ends exactly where you want it to.

While we’re talking about MP3 files, if you have all your music in iTunes and want to sync it with your Android phone, there are a couple of easy ways to do this – this post explains how: Transfer Music to your Android Phone from iTunes 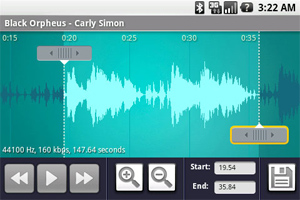 Imagine you’ve spent forever and a day installing the best apps possible on your Android phone. What happens when you switch phones, or your handset breaks and you have to get a replacement? Apple have this covered as your Apps are backed up to iTunes everytime you sync, so how do you deal with this if you’re using an Android phone? Simple – use AppManager.

It allows you to back up all your apps to the Micro SD card in your phone. If you need to switch phones, you can simply move the memory card and restore all your apps once you’ve reinstalled Appmanager. Appmanager is a free download from the Android Market on your device. 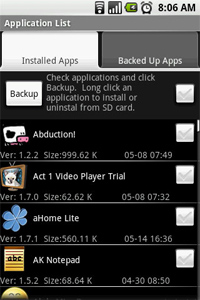 These are just my top 10, there might be other apps out there that are even better than these and I’ve just not found them yet, so if you’re using an app that you think should be in the top ten leave a link below!

Not sure what to get? Check out our Top 10 HTC Hero Accessories