Fake Otterbox cases are a growing problem, as customers on eBay and the Amazon marketplace are receiving well-disguised knockoffs instead of the real deal. With real and fake cases mixed together, it’s hard to know how you can ensure you avoid the fakes – although avoiding suspiciously low prices and buying from authorised dealers is a good start.

Today we recorded a video on fake Otterbox cases, showing you the differences between the knockoff and the genuine article. We also discuss how to spot fakes before you buy them, and what to do if you do end up buying a replica case. The video is embedded below, but if you prefer to read have a look at the script below!

This is Will from Mobile Fun, and I’m here to talk to you about something a bit different than normal: fake phone cases.

So here I have the Otterbox Defender for the iPhone 5. Otterbox is one of the most popular phone case brands in the world, so it’s no surprise this case is well constructed and fits the iPhone well.

Here I have another case which we bought from Amazon, which looks very similar to the Otterbox – but it isn’t. It’s a counterfeit, made to look the same but at a lower price. 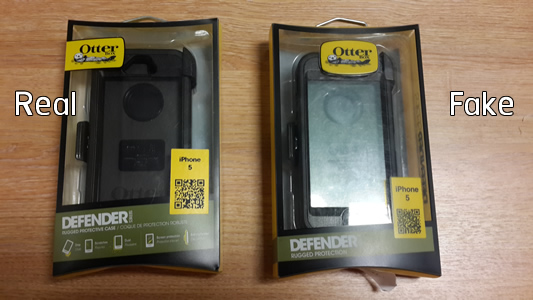 The differences between fake and real

There are some differences though, if you know what to look for. Probably the most obvious is that there’s green tinted cellophane around the screen protector of the fake one; Otterbox don’t use this. The clip is also different – on the genuine article, the font is wider and the ring around the lettering is thicker. Another good way of telling the difference is to take off the clip, and feel the back of the case. The genuine Otterbox case has a soft feel back which adds grip, while the fake is cheaper and less textured plastic. 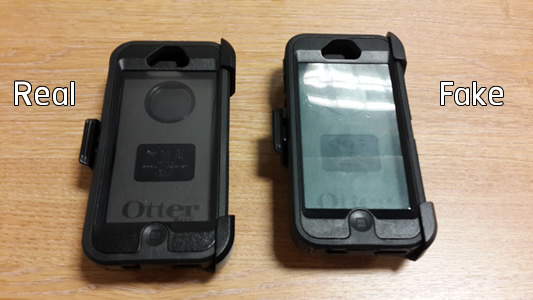 Fake has green tinted cellophane around the screen protector.

The counterfeit is cheaper, but it’s also of worse quality. Inferior materials are used, certain details are off, and of course when the case is inevitably damaged Otterbox won’t replace it!

Otterbox have gained a reputation for making cases that keep your valuable smartphone safe, but with a counterfeit you get none of that assurance. If you chose an Otterbox because you’ve heard good things about the brand, by going with a knockoff instead of the real thing you’re sacrificing the very reason you chose the case in the first place. Ultimately, the difference in price isn’t worth the risk that your phone will be left unprotected. 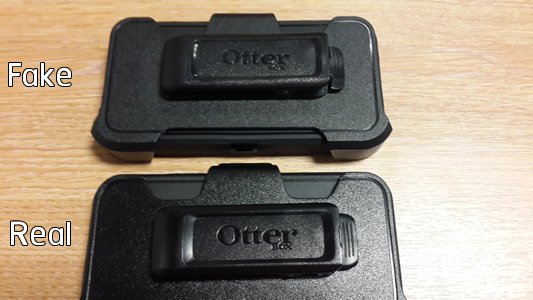 Clip on the genuine case has a thicker border and wider font.

How to avoid fake cases

So here’s how to avoid counterfeit cases: 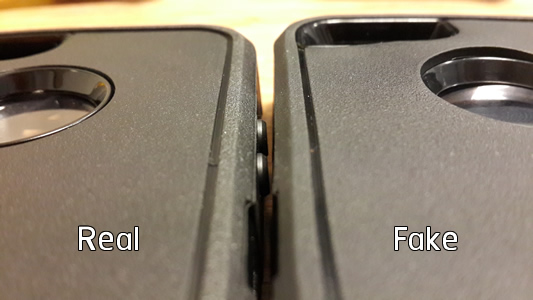 Genuine item feels softer and textured to the touch.

Of course, if you do order a case and you suspect it may be a fake, what can you do? Well, usually the best recourse is to document the fake, return it to the retailer, then report the seller to the manufacturer and/or the operator of the website you bought it from (e.g. Amazon or eBay).

I hope you find these tips useful. If you have any questions or comments, please feel free to leave them below. Thanks for taking a look and stay sharp out there!