Wi-Fi is the backbone of modern computers, allowing smartphones, tablets, PCs and smart appliances to communicate easily and efficiently. Every day, millions of devices with Wi-Fi capabilities are created and put into homes and businesses across the globe. However, Wi-Fi may not be a viable technology in the long term, as the EM spectrum become increasingly crowded and interference becomes a greater issue. One Austrian professor, Harald Hass, thinks he has the answer: Li-Fi, a new technology that uses regular LED room lights to transmit data.

Li-Fi works by rapidly flickering the status LEDs that are part of so many smart devices these days, from TVs to routers and smart appliances. This flickering is too quick for a human to detect — within nanoseconds! — but it can be encoded with enough data that speeds would be similar to Wi-Fi or a cellular tower. Best of all, multiple LEDs can be used simultaneously in a single location without interference. As well as serving as an alternative to Wi-Fi, it could also be a complementary service that enhances both cellular and Wi-Fi connections. 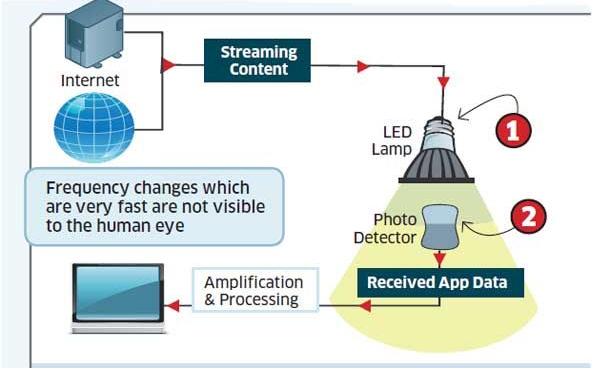 Using visible (or near-visible) light in this manner also provides greater security, as an intruder would need to be within visual range of the transmission to intercept it. Of course, this is also a downside, as you couldn’t receive transmissions through walls as you can with Wi-Fi and other RF communications.

The proliferation of smart devices across the home — and a smart algorithm — ensures that your device can always use the closest LED light available, keeping throughput high and the connection stable. As well as serving as an alternative to Wi-Fi, it could also be a complementary service that enhances both cellular and Wi-Fi connections.

The technology is already being investigated by well-known names like Disney Research and the Fraunhofer Institute in Berlin, and it could well be an important part of future mobile technology, from smart appliances to the Internet of Things.

Harald Hass and the Li-Fi project have been covered by BBC Click and been the subject of a very interesting TEDGlobal talk. For more information, please check out these videos and let us know what you think in the comments below!