Discontinued  - not available for purchase
Introducing the next generation of Blackberry smartphones which combines the iconic keyboard with a touchscreen, the Bold 9900.

END_OF_DOCUMENT_TOKEN_TO_BE_REPLACED

The Blackberry Bold 9900 is the thinnest smartphone RIM have ever made. It is just 10.5mm thick, making it more pocketable, and more comfortable to hold, than any other Blackberry handset.

Combines both physical keyboard and touchscreen for a next-generation experience

Blackberry smartphones have long been known for their industry-leading keyboards that let you search, text and type at speed without sacrificing accuracy. Now the best-selling Bold series has been updated to feature a capacitive touchscreen, giving you the best of both worlds. So now you can reach out and touch your information like never before, swiping, pinching and zooming with fluid Liquid Graphics on a touch screen. Or type with ease using the iconic BlackBerry QWERTY keyboard.

Get things done with the Blackberry Bold 9900. The powerful 1.2GHz processor lets you get into your apps and onto the web quicker than ever before, meaning more time being productive and less time waiting for things to load. The 8GB of onboard memory will also let you store more files and apps than ever before. And if that's not enough, you can use micro SD cards up to 32GB for potentially unlimited amounts of storage. 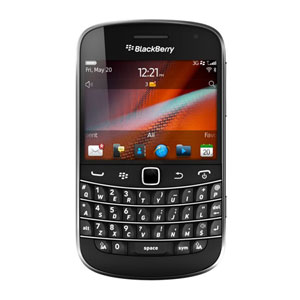 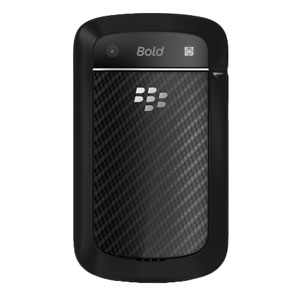 Not only is the Bold 9900's touchscreen the first for the series, but it's also the biggest, highest resolution screen on a Bold to date. Measuring 2.8" with a VGA resolution of 640 x 480 pixels, colours are brighter and text is clearer than on any other Blackberry smartphone.

Also new to the Blackberry Bold 9900 is the ability to record 720p HD video, as well as take 5MP stills whenever and wherever you are. There is an LED flash for helping light up the dark, while geo-tagging lets you keep a reminder of where your photos were taken. Other advanced features like face detection and image stabilisation make the Bold 9900 for more than just quick snapshots, elevating it to a true alternative to carrying a dedicated camera with you.

BlackBerry OS 7 brings you the ultimate performance you expect in a new BlackBerry Bold. Powerful, high fidelity browsing, separate personal-life and work-life content, voice enabled searches, plus additional personal and productivity apps help the Bold 9900 not just catch up to the competition, but potentially surpass them.

This handset is covered by a full 24 month manufacturer's warranty.

This SIM free handset is unlocked and compatible with any 2G/GSM network and 3G SIM card. Some network & 3G specific services may be unavailable with this handset.

Product images are for illustrative purposes only, specific colour variants cannot be guaranteed unless otherwise specifically stated on the page.