Discontinued  - not available for purchase
Sleek, stylish and functional the Elago Stylus Ball and Pen is crafted from solid aluminium and provides precise control with smartphones and tablets.

END_OF_DOCUMENT_TOKEN_TO_BE_REPLACED

Designed for use with any capacitive screen

The Elago Stylus Ball and Pen is designed to be compatible with any capacitive touchscreen, so whether you've got an iPhone, iPad, Galaxy Nexus 7 or Galaxy Tab you can be sure the stylus will work flawlessly to help you type faster and draw better. Furthermore, the inclusion of a special silicone polymer on the tip means that the stylus is exceptional in its precision.

With this stylus you won't have to remember to carry around a pen with you as it has a built in pen. This stylus combines universal touch screen phone compatibility and a pen, making it the perfect accompaniment for the office or home.

The soft round end of the stylus makes a contact with the screen to control it. As it is a soft end, it won't damage your screen in any way and you won't have any finger prints to contest with. 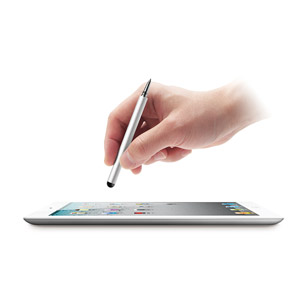 Ever press the wrong button on your screen by mistake? Tired of cleaning your screen all the time because its got finger prints on it? Worry no more with the Elago Stylus Ball and Pen you will be able to control your phone or tablet's screen with increased accuracy. The stylus can be used in all situations and for all applications.

Unlike most stylii which degrade over time and become unfit for purpose, the Elago Stylus Ball and Pen includes a replaceable rubber tip which can be used to extend the length of the product's lifetime beyind that or ordinary or cheap stylii. 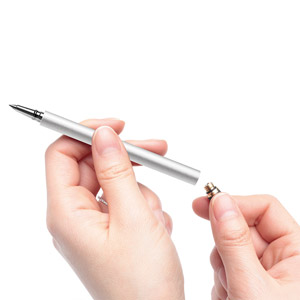 We have extended our returns period for the Christmas season. Items purchased from Mobile Fun and dispatched during the period from November 1 2020, to December 31, 2020, inclusive may be returned at any time before midnight on January 31 2021.